Muzzas Home of the Suzuki T500 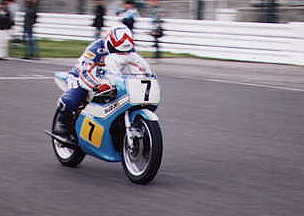 “My name is Clive Strugnell, from South Africa. From 1973 to 1986 I used run the Suzuki racing team in South Africa. I was also the marketing and PR manager for Suzuki South Africa. At that time we were allocated Suzuki factory racing bikes for use in our national championship races, both on and off road. The bike you show at Suzuka looks like a special made to run concurrently with the RG500’s for certain circuits. I am sure the bike shown in your pic was ridden by Hideo Kanaya, who ran a Suzuki dealership in Tokyo at the time. He was also a Suzuki factory rider and a team mate of Sheene in about 1975. I have photographs of an identical bike in his showroom taken in May 1977. At that time he told me they had built the bike using an early RG500 frame, with the lay down back shocks like the RM off road bikes of the time. They tried to use a similar set up on the last TR750’s but it was no match for the new Yamaha OW 700 and 750 of that time. A call to Mr Itoh, once World 50cc champ and now a director at Suzuki can confirm this. I still have a completely original factory TR500 water-cooled twin with a dry clutch and PEI electronic ignition as used by Sheene in 1975, just before the introduction of the RG 500. It used the same frame as the last of the upright shock TR750’s and had a waterpump in the place of the oil pump.The same model was raced very successfully by Stan Woods and Percy Tait. On the longer GP circuits it was more than a match for the overbored TR350 Yamahas which were often raced in the 500 class. However it’s development was neglected because of the new RG500.”